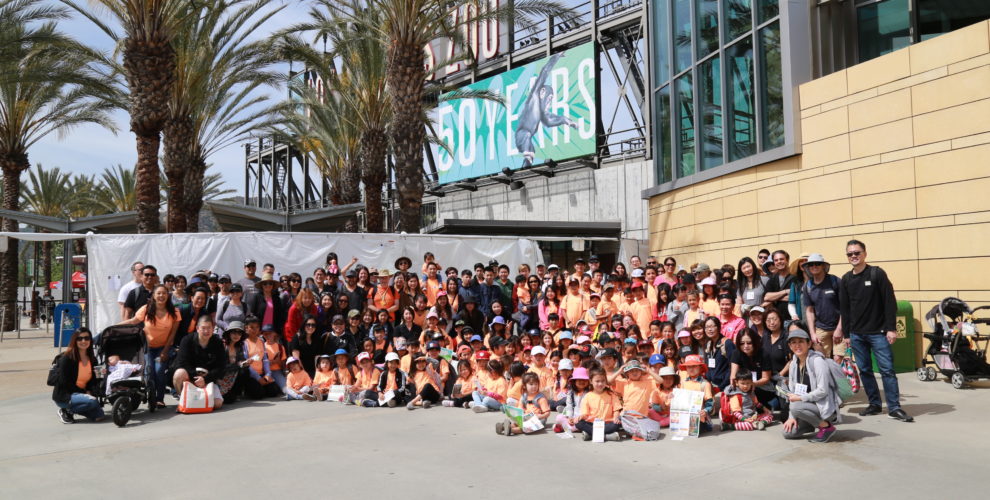 Even the crazy weather we were having in Southern California decided to cooperate with us this spring day. On May 18, four buses left the OCG campus in Huntington Beach for our field trip.

Right at 10:00 AM, families who had driven directly to the LA Zoo started to gather in front of the main gate. Students were wearing the brand new orange-colored OCG T-shirts, which helped us spot them throughout the day. Once the buses arrived, we took a group picture on the side of the gate. Then off we went: each group broke off to explore the zoo grounds.

JFL middle school, high school and J1 students formed one group with three teachers and headed first to the sea lion and seal tank. Yes, it was a little hard for these teenagers to match the excitement felt by the younger groups, but nonetheless we pressed forward…

It seems our visit coincided with the major nap time for a lot of animals. We passed by a lion enclosure, with male and female lions enjoying their slumber. Later, we saw a pair of tigers in a similar position. Maybe our Japanese word of the day should be “ohirune”- a nap. Bears did not even bother to come out from hiding, so we all stared at the concrete mountain before giving up. In contrast, apes and monkeys were all active and entertaining.

The zoo grounds were large enough for different groups of students to wander off, but small enough that we ran into each other occasionally. One popular gathering spot was a picnic area by the Gorilla Grill. A steady stream of groups stopped by to rest and enjoy “obento” lunch, always a field trip highlight!

After lunch, we realized we still had quite an area to cover, including the large elephant enclosure. The Elephants of Asia is dedicated to providing the best environment for these gentle giants outside of their natural habitat.

Over 3.6 acres of soft surface provides them with a safe area to enjoy and exercise. As we get closer, we could see a large red structure that looked like traditional Thailand architecture.

We made a large loop around the enclosure, but no luck! None of them were out and about. We continued the large loop almost to the end and to Moon-sensei’s total excitement, one elephant was acing away and eating. We never got him to turn our way, but at least we can officially say we saw one! When we got the last viewing platform, Billy, the star elephant with long tasks, was making his rounds. Hopefully, the other groups of students were able to get a glimpse of him.

At 1:45PM, we all headed back to the gate to catch buses back to OCG. We appreciate the PA officers’ hard work that made such an enjoyable time possible!